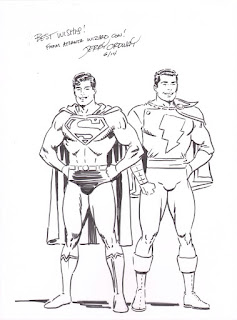 I don't know about you folks out there in reader & listener land, but this has been THEE art post I've been looking forward to tackling the most since I decided to showcase commission pieces and original art as a regular feature here on the blog.

The EXTRAORDINARY Jerry Ordway, a comic creator in my opinion that is one of the all-time greatest writers and artists to ever tackle Superman and ever tackle Captain Marvel, so the fact that he had lengthy, critically acclaimed and legendary runs on both characters, makes this post extra special. 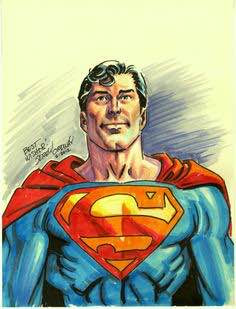 While it's always great seeing talented artists tackle commission pieces featuring the two greatest comic book heroes to ever be published with a DC Logo on their cover, there is always something very special about commission pieces coming from artists that had lengthy runs on the characters. They know the ins and outs of these characters, what makes them tick, and how their face and body react in unison to the trials and tribulations they encounter in each adventure. 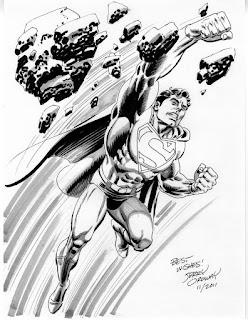 Jerry Ordway, like many up and coming artists in the 70's and early 80's first caught the eye of the comic industry getting his artwork published in fanzines. Jerry quickly caught the eye of DC Comics and found work as an inker and penciller in the Earth-2 corner of the DC Multiverse in various Roy Thomas written projects like All-Star Squadron, America vs. the JSA, and Infinity Inc.

Jerry gained even more notoriety when he was tapped to draw a number of entries for the Who's Who in the DC Universe series celebrating DC's rich 50 year history, as well as tackling some of the inking chores on the epic comic crossover event Crisis on Infinite Earths. 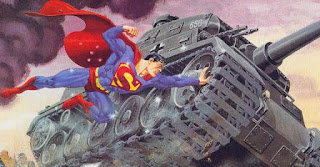 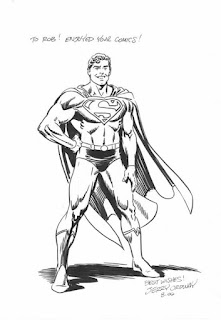 After a brief stint at Marvel inking John Byrne on Fantastic Four, Jerry came back to DC, and helped launch a new age of Superman with Byrne and Marv Wolfman. Byrne set the stage for the Post-Crisis origin and direction for the Last Son of Krypton, starting with his 6 issue Man of Steel mini-series. Byrne then tackled writing and art duties on both Action Comics and the new Superman series, with Jerry Ordway tackling art and co-plotting duties on the Adventures of Superman series with co-plotter and scripter Marv Wolfman. 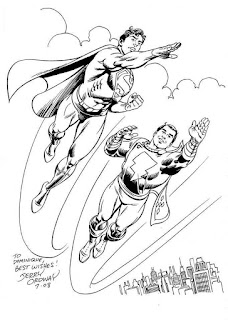 With issue #436 Byrne took over the co-plotter and scripting reigns for Wolfman, with Ordway still co-plotting and penciling. Starting in Adventures of Superman #445, Jerry Ordway took over on full writing duties while still penciling the book. He continued working on the Superman books as either a writer, penciller, or inker for the next six years! He finished his amazing run with the beginning of Superman's return from death at the hands of Doomsday, in Adventures of Superman #500. 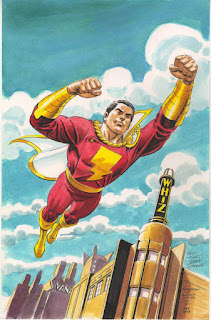 Following his run on Superman, Ordway published the creator owned, four issue mini-series Wildstar: Sky Zero at Image Comics, before once again returning to DC Comics to work on possibly the defining moment of his incredible comics career, the 93 page Power of Shazam Graphic Novel in January 1994. Whereas previous attempts to update Captain Marvel for the more serious Post-Crisis DC Universe, had failed, Ordway's stunning retelling of Captain Marvel's origin brought to life with his beautifully painted art, revitalized the character. 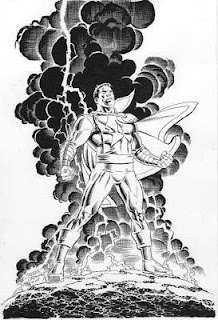 This brought with it a previously untapped height of popularity and quality for the Captain Marvel character under the DC logo on the cover, at least in my opinion. (DC's close second would be the E. Nelson Bridwell & Don Newton era that ran through the tail end of the 70's Shazam series and continued into the Dollar Comics Era of World's Finest Comics.) 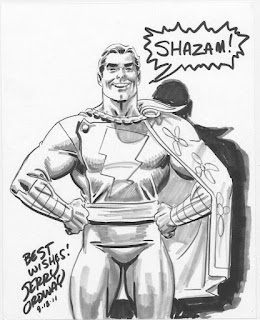 Following the splash hit of Ordway's Power of Shazam Graphic Novel, it was released in softcover format 11 months later, and followed by an ongoing series of the same name. The Power of Shazam monthly comic ran from January 1995 to January 1999, spanning 47 regular issues, as well as an Annual and DC One Million tie-in issue. Ordway was tasked with writing the entire run and providing gorgeous painted covers, while Peter Krause provided pencils on interior art for the bulk of the first 41 issues of the ongoing series. With issue 42 of the series, Ordway took over penciling duties, where he was inked by the late, great Dick Giordano. 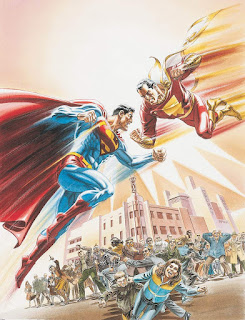 Two of the high points of this great run for me personally, were in issues #20 & #46 of the series, where Superman and Captain Marvel crossed paths. Issue #46 was particularly special, as it was great to see not only write, but also pencil two of the most iconic characters of all-time, and two characters he helped re-define and achieve all-time heights in popularity in the modern era of comics. And it had a fantastic cover of Superman & Captain Marvel flying at each other, fists cocked, ready to deliver thunderous blows, in homage to Nick Cardy's 1974 cover to Superman #276. 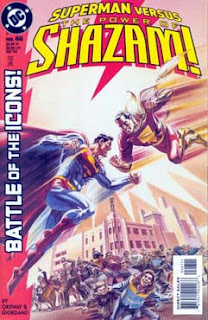 Welcome to the 6th episode of the Superman & Captain Marvel Power Hour Podcast, the podcast devoted to exploring the publishing history & adventures of both the Last Son of Krypton and the World’s Mightiest Mortal. I am your host Kyle Benning, and thank you for joining me on this journey to explore the evolution of my 2 favorite DC Characters, Superman & Captain Marvel.


This time out in the 6th Episode of the show, I take brief look at the extraordinary impact Jerry Ordway had as a writer and artist on both Superman and Captain Marvel in the Post-Crisis DC Universe, and culminate my coverage by taking a look at Ordway's Power of Shazam #46 that went on sale December 2, 1998.


As always, you can subscribe to the show on iTunes, or download it directly here:Superman & Captain Marvel Power Hour Ep 006 Jerry Ordway Spotlight


In the episode I reference the post-Crisis revival and reimagining of Captain Marvel's origin in the Power of Shazam Graphic Novel from 1994. I covered this Graphic Novel previously with my pal J David Weter back on an episode of King-Size Comics Giant-Size Fun. You can find the episode here: http://kingsizecomicsgiantsizefun.blogspot.com/2015/07/king-size-comics-giant-size-fun-ep-023.html 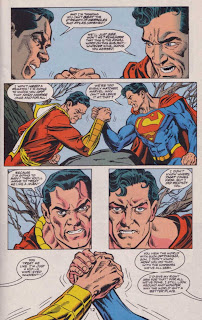 Be sure to come back tomorrow for an accompanying blogpost to the episode that showcases some of the fantastic Superman and Captain Marvel commission work of Jerry Ordway.

Thank you very much for listening. Be sure to check out the show headquarters & blog at www.SupermanCaptainMarvel.blogspot.com. There you’ll find extra content such as the show notes, extra posts spotlighting Superman & Captain Marvel art, the characters’ publishing history, and collected editions. You can leave feedback for the podcast there at the blog, as well as by emailing me directly at metropoliskid41@gmail.com, by leaving an iTunes review, or by visiting the facebook page at facebook.com/SupermanCaptainMarvel. You can also follow the show on twitter under the Twitter Handle @KryptonsWizard.

This podcast is made for entertainment purposes only. Superman, Captain Marvel & Shazam are copyright of DC Comics, a part of Warner Bros entertainment. These characters are discussed under fair use, and no infringement is intended.