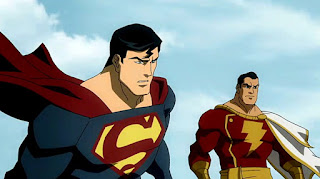 Welcome to the inaugural episode of the Superman & Captain Marvel Power Hour Podcast, the podcast devoted to exploring the publishing history & adventures of both the Last Son of Krypton and the World’s Mightiest Mortal. I am your host Kyle Benning, and thank you for joining me on this journey to explore the evolution of my 2 favorite DC Characters, Superman & Captain Marvel. As we follow these characters’ development from the Golden Age to modern day, I’ll be comparing and contrasting their development and changes through the decades and exploring in what ways these two characters are similar yet very, very different. In each episode, I will cover solo stories for each character, or cover an adventure that features both Superman and Captain Marvel together.

To kick-off my podcast, the first episode will be focused on the Superman/Shazam!: The Return of Black Adam animated short from 2010.

Thank you very much for listening. Be sure to check out the show headquarters & blog at www.SupermanCaptainMarvel.blogspot.com. There you’ll find extra content such as the show notes, extra posts spotlighting Superman & Captain Marvel art, the characters’ publishing history, and collected editions. You can leave feedback for the podcast there at the blog, as well as by emailing me directly at metropoliskid41@gmail.com, by leaving an iTunes review, or by visiting the facebook page at facebook.com/SupermanCaptainMarvel. You can also follow the show on twitter under the Twitter Handle @KryptonsWizard. 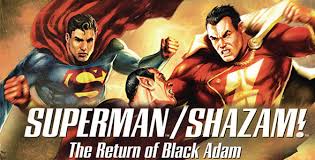 Thanks for listening, be sure to check back here at the blog on Wednesday February 3rd for information regarding the content of the SUPERMAN: From the 30's to 70's and SHAZAM!: From the 40's to the 70's hardcover collections. And then come back next Sunday, February 7th, for the 2nd episode of THE SUPERMAN & CAPTAIN MARVEL POWER HOUR.


This podcast is made for entertainment purposes only. Superman, Captain Marvel & Shazam are copyright of DC Comics, a part of Warner Bros entertainment. These characters are discussed under fair use, and no infringement is intended.

Posted by MetropolisKid41 at 1:59 PM No comments: 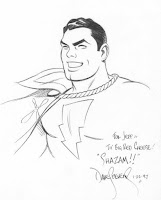 One of my personal favorite artists is the late great Dave Stevens, who is probably best known for his creator owned project, the Rocketeer, which should come as no surprise is one of my favorite characters. (In fact I'm even working on making a Rocketeer Helmet of my own, which I will have to share here once it's completed). The Rocketeer made his first full appearance as a back-up feature in Mike Grell's Starslayer #2 from Pacific Comics (the Rocketeer made a cameo appearance via a house ad in the first issue of this same series). 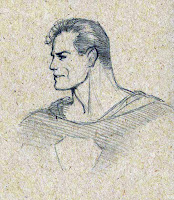 Now despite the Rocketeer not appearing until 1982, his story is routed in the Golden Age, that magical time for super heroes and adventure comics set during the World War II. So in this was, despite coming 40some years later, the Rocketeer is spawned out of that same classic era of Americana that birthed both Superman and Captain Marvel. So naturally, this makes Dave's work and tone perfect for tackling the Last Son of Krypton and the World's Mightiest Mortal. Unfortunately Dave never got the chance to tackle either character in a sequential story, man that would have been amazing, but we are lucky enough that Mr. Stevens cranked out a few commission pieces over the years before his untimely death in 2008. Unfortunately I wasn't able to find much information accompanying these pieces I came across. If anyone out there knows any of the details behind, or better yet, possibly owns one of these pieces, please feel free to share any details you have behind them. 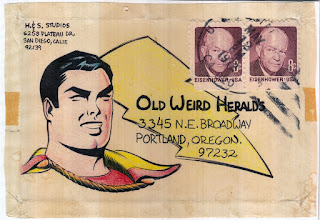 Dave's other claim to fame is perhaps being one of the all-time greatest artists at drawing superheroines. Dave made quite the career for himself with his beautifully painted pin-ups and covers starring female heroes of action. His entries in DC's Who's Who are second to none. I would have loved to see what Stevens could have done with a Lois Lane series following the adventures of Lois as she does some hard-nosed investigative journalism, undercover amongst the criminal underworld. Oh what could have been. 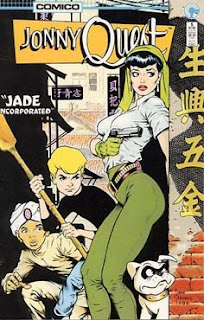 Posted by MetropolisKid41 at 5:00 AM No comments: 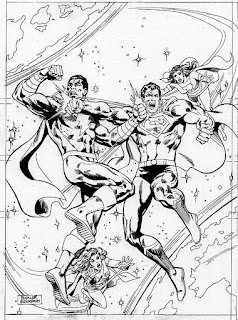 This is the first post of what will be a reoccurring feature; posts that feature fabulous Superman & Captain Marvel artwork with a common theme in mind. Some of these will be commissions or sketches (like the next post, which is do out on Friday), and others like this post will feature some of the original artwork progression for iconic pages and/or covers featuring Captain Marvel and Superman.

If you were to think of one artist that goes with Superman & Captain Marvel on a cover together, odds are Rich Buckler would be the name that came to mind. No other artist out there has tackled more covers featuring the Last Son of Krypton vs. the World's Mightiest Mortal than Rich Buckler, who is an extraordinary artist that was very prominent at both DC and Marvel Comics in the 70's and 80's for both interior artwork, and especially covers. Along with Ross Andru and Jose Luis Garcia-Lopez, Rich Buckler was a key artist responsible for defining the house style and sleek look of Superman on the covers of his 3 ongoing titles, Action Comics, DC Comics Presents, and Superman. Luckily for us fans, that also meant some gorgeous covers also featuring the Big Red Cheese next to the Man of Tomorrow, typically trading blows, even if the two super-powered Titans never found themselves at odds inside of the issue itself. 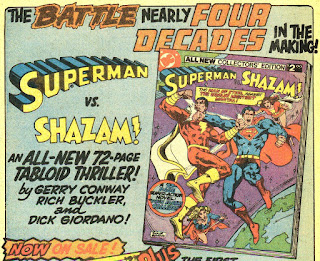 One of the most iconic covers from the Bronze Age era of DC Comics, was the fantastic Buckler & Dick Giordano cover to the Superman vs. Shazam! Treasury Comic, which was All-New Collectors Edition #C-58 from 1978, seen in the house ad pictured to the left, with the original artwork above.

Obviously, being a fan of both characters, I would much rather see the Last Son of Krypton and the World's Mightiest Mortal working together to tackle a common threat, instead of repeatedly finding themselves at odds with one another and fighting each other. That said, seeing these two powerful heroes exchange blows on a cover makes for quite the eye-catcher and attention grabber, and can't help but pique the interest of the casual and devoted comic fan alike. In addition to the Superman vs. Shazam Treasury cover & interiors, Buckler also drew the gorgeous covers (and interiors) featuring both Superman & Captain Marvel for DC Comics Presents #33, 34, and 49, as well as the cover and interiors to All-Star Squadron #36. All-Star Squadron was a series written by Roy Thomas that featured stories set in the Golden Age and fit continuity wise in between the Golden Age adventures of the members of the team. So in the story that spans All-Star Squadron #36 & 37, we see the Golden Age Captain Marvel (Earth-S) square off against the Golden Age Superman of Earth 2 (this is an analog, not a 1 for 1 swap, more on that in a later post). You can see the Buckler pencils with Jerry Ordway inks for All-Star Squadron #36 below, next to the colored, finished cover that hit stands. 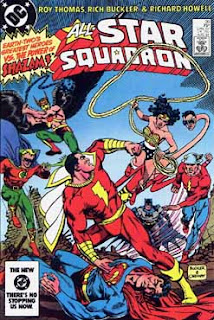 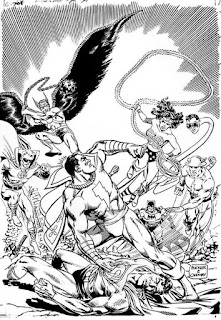 Many of the stories I've mentioned today featuring Rich Buckler's fantastic art can be found in the Superman vs. Shazam! Trade Paperback Collection. It collects the Treasury Comic story, as well as the 3 issues of DC Comics Presents featuring Buckler's artwork, as well as DC Comics Presents Annual #4, which is written by Roy Thomas & Joey Cavalieri with artwork by Gil Kane. That would be a great book to add to your collection if you don't already own the stories in some other format.

That'll do it for this time out, don't forget to come back to the blog on Friday for another art post, this time featuring some fantastic commission pieces and sketches by the late, great Dave Stevens. And be sure to check in on Sunday January 31st, for the very first episode of the Superman & Captain Marvel Power Hour Podcast! And with that, I'll leave you with this, a fantastic Captain Marvel convention sketch done by Rich Buckler in recent years. 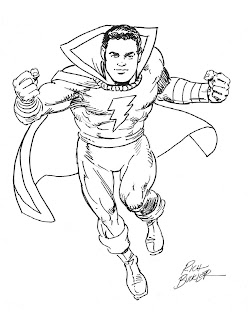 Posted by MetropolisKid41 at 7:51 AM No comments: 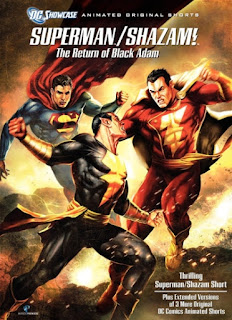 Welcome to the Blog "The Superman & Captain Marvel Power Hour," which serves as the headquarters and homepage for the Podcast of the same name. I'm your host Kyle Benning, and this is going to be a page and podcast devoted to exploring the history of my 2 favorite DC Comic Characters, Superman and Captain Marvel, while comparing and contrasting them along the way. Each episode will give you content to scratch your itch for both characters, whether that's one adventure that features both characters together, or coverage of two different stories, one featuring the Last Son of Krypton, and the other starring the World's Mightiest Mortal.

You may know me from my other podcasts that all fall on the same feed under the King-Size Comics Giant-Size Fun Podcast banner. Unlike those shows, this one will remain its own unique identity on its own separate Podcast Feed. After much internal debating, I decided I want this project to be its own standalone entity, which also allows me the freedom to talk about either solely Captain Marvel or solely Superman in some other format on one of my other shows over on the King-Size Comics Giant-Size Fun feed. 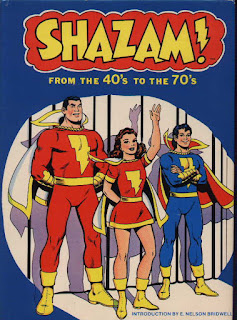 The first episode of the Podcast will launch on Sunday January 31st, and cover the "Superman/Shazam!: Return of Black Adam" animated short from 2010. After that initial episode I'll dive into my comprehensive coverage of the collected editions Superman: From the 30's to 70's and Shazam!: From the 40's to the 70's. For the time being, episodes will drop every 2 weeks, typically the first & third Sunday of each month, with the occasional bonus episode thrown in from time to time. Most episodes will focus on comic coverage, but I will occasionally look at the two characters in other mediums, especially animation.

The goal of this podcast and blog really boils down to giving me a regular reason to go back and revisit the many classic stories starring my 2 favorite DC Characters and give me a forum to talk about them. Along the way, I hope I can take you listeners and readers along and help you either revisit an old favorite or introduce you to a new gateway to explore. Superman & Captain Marvel have both been around for over 75 years now, they both have rich histories, and unfortunately, at least in this guy's opinion, both found themselves mistreated and marginalized by DC in recent years. So this podcast and blog will serve as an outlet to celebrate and examine their heyday and happier times. I have a lot to say, and a lot of passion to share on these two characters, and I hope you'll join me for the ride. 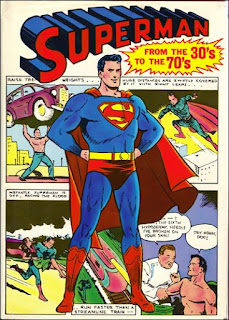 If you can't wait for January 31st, and would like to hear some of my thoughts on Captain Marvel and/or Superman, you're in luck; I've already talked about both characters numerous times on various shows on my King-Size Comics Giant-Size Fun Podcast feed. Below are links to recent episodes I've done on the "Strange Visitor from Another World" and the "Big Red Cheese."

Thanks for reading; hopefully you'll join me next Sunday for the inaugural episode of “The Superman & Captain Marvel Power Hour!”
Posted by MetropolisKid41 at 8:31 AM 1 comment: